On Monday in our Worship, we heard how Jesus rode on a donkey with all the crowds cheering, shouting His name and waving palm leaves. I think that must have been really amazing!

Jesus and his disciples had arrived in Jerusalem to celebrate the Passover Feast. This was a special meal that people ate together every year to remind them that God had freed the Jewish people from being slaves in Egypt. Jesus sent Peter and John ahead to prepare the Passover meal. He told them exactly where to go, what house to enter and what to say. They did as Jesus had asked and found the house and made the arrangements with the man just as Jesus had said. 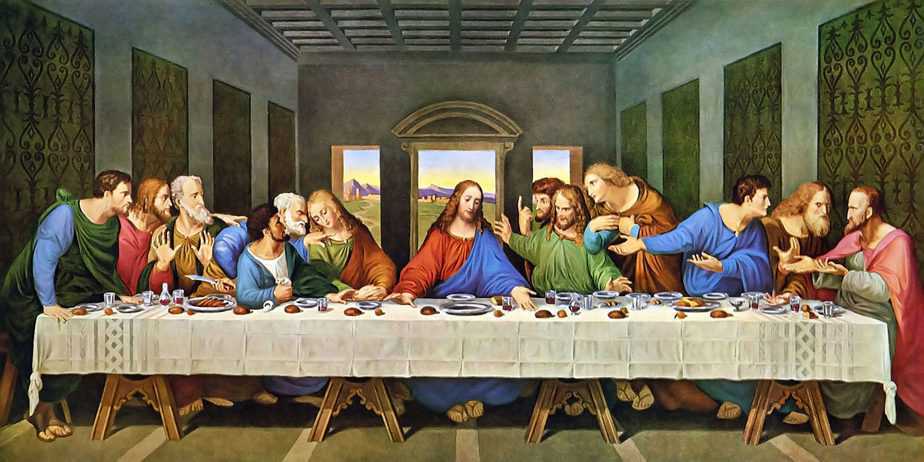 All the disciples sat together to eat the Passover feast. This is a very famous picture of Jesus and His friends which was painted by Leonardo da Vinci. Jesus knew this would be the last meal he would eat with his disciples before he died. Jesus broke the bread and gave thanks and passed it round to the disciples. You might like to eat some bread now to remember that moment.

In the same way Jesus took the cup and passed it round. If you’ve got some water, you might like to have a drink now to remember that.

During the Passover meal, Jesus did a strange thing. He took off his outer clothing and wrapped a towel around his waist. Then he poured water into a bowl and began to wash the disciples’ feet. How would you feel if a teacher was to wash your feet?

Although the disciples called Jesus Lord and Master, he was also their servant. And they were to be servants also, to those that they would speak to after Jesus had gone. They should set a good example by helping others and not putting themselves above them. That’s something we can all do today – we can see each other as equals. Just as, Christians believe, God sees us.

As they were all sitting together, Jesus told the disciples that he would be killed and that one of them sitting at the table would betray him, would give him away to the authorities. Explain how Jesus dipped a piece of bread and passed it to the man who would betray him. His name was Judas Iscariot.

Jesus then said that he would be with them for only a little while longer. He said to his disciples, ‘I give you a new command: love each other. You must love each other as I have loved you. All people will know you are my followers if you love each other.’

That’s a good way to end this story, with these words – Love Each Other. This means caring for everyone we are with and for the world by staying in, trying to get along with everyone, being helpful, saying kind words, sharing and putting others first. Wouldn’t our homes and world be a much better place if everyone decided to care for and help each other like this?

is a song that reminds us to be a servant like Jesus was to His disciples and is to us.

Think of what you know about the Easter story.

Imagine how Jesus must have felt telling his special friends, the disciples, he would be leaving them soon.

Then think of what Jesus told the disciples about loving others.

Can we be like the disciples? Do we treat everyone with respect?

Thank you for the special time of Easter.

Please help us to put others first,

to treat everyone with respect

and to love others as you love us.